EYES LIKE BLACK STARS were a six piece rock, screamo and post-hardcore band formed in 2003.

Eyes Like Black Stars formed in a cold Adelaide winter in 2003 and disbanded a year later. The band members met at a Love Like... Electrocution show and started jamming immediately at The Church (Young Street Church) where guitarist Mark lived.

Eyes Like Black Stars played their first show at the Glenelg Surf Life Saving Club in late 2003 with Later That Night, Through Closed Eyes and Wendy Icon, following this they played throughout Adelaide pubs and venues almost weekly with like minded bands such as Love Like... Electrocution and The Paddington Bear Affair.

Their final show was in support of Off Minor (USA) at the Enigma Bar of which was also one of the last Love Like... Electrocution shows. This show was the foundation for the soon to be formed THIS CITY DYNAMITE!!!.

In 2018 they released a cassette tape containing all of their recorded songs with the Canadian label Emocat Records. 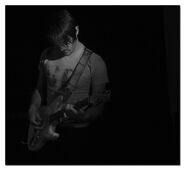