Eternal Paradox is the debut EP from solo musician Evilface, released in August 2011. Recording sessions for the release began some time in early January of 2011 and concluded a few months later. The recordings were basically unused until the final song was mixed and the EP was released. 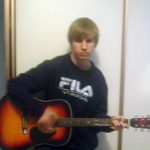