The Church was a space located in the south of Adelaide. The Church was the home of many Adelaide musicians and artists for over a ten year period, the first inhabitants building bedrooms, a dark room, rehearsal room and studio within the walls which gave birth to a plethora of Adelaide bands.

The Church (previously St Ann's Church) was constructed in 1878 and left dormant for many years before being taken into the care of a group of young Adelaide musicians in the early 2000's. This initial crew took to transforming an old unused space into a home and place for like minded people to congregate and create. Over the years and undoubtedly from the punishment of loud bands and parties, the ceiling and walls cracked and the kitchen floor was repainted black but the skeleton on the cross still hung and the same group of friends stayed stuck to the dirty floorboards. In the following years and until its unfortunate demise in 2012, The Church was the centre point for the formation of numerous Adelaide bands (listed below).

Death Of The Church[]

At the beginning of 2012 the owners of The Church made the decision to turn it into apartments and the eviction from The Church was imminent. Straight away a plan was hatched and put into action to make a film documenting the space, friendships and the bands The Church had helped form. In less than three weeks, previously disbanded bands reunited, a call out was made out to friends with skills and equipment to help pull it off. On the last day of the lease with keys due to be handed in the following day, bands and friends converged in the hall with the plan to capture the spirit of The Church, with available bands connected to The Church playing with conviction and sincerity on film, their final time on the hallowed stage.

Unfortunately due to the time frame, many great bands were unable to participate. No one was paid, no one was asked to be. The one shared goal to commemorate the great times shared and everything that had been accomplished within the great stone walls (gallery). A quick makeshift family tree of bands was drawn on a whiteboard (gallery).

When the last note was struck and final frame captured, those who could attend on the day assembled outside to take a photo on the street to commemorate what had been accomplished. All the people involved in the filming the day donated their time and expertise over the following weeks, some worked tirelessly to compile and edit extensive footage and photographs. Other mixed and mastered the recordings whilst designing the artwork and realising a fitting passage for a DVD to be released was done by some people had called The Church home.

The film / documentary Death of the Church was directed by Dan McGuiness and screened once only at The Mercury Cinema on March 18, 2012. Physical copies of the DVD remain available in small batches and available from the bands who played on the day (gallery). 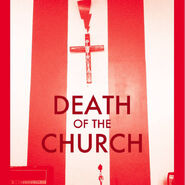 DEATH OF THE CHURCH DVD COVER

Bands of the Death Of The Church DVD[]