THIS CITY DYNAMITE!!! was a four piece rock, screamo and punk band formed in 2004 formed from members of Love Like... Electrocution and Eyes Like Black Stars. 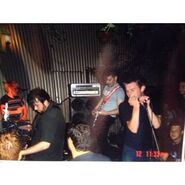